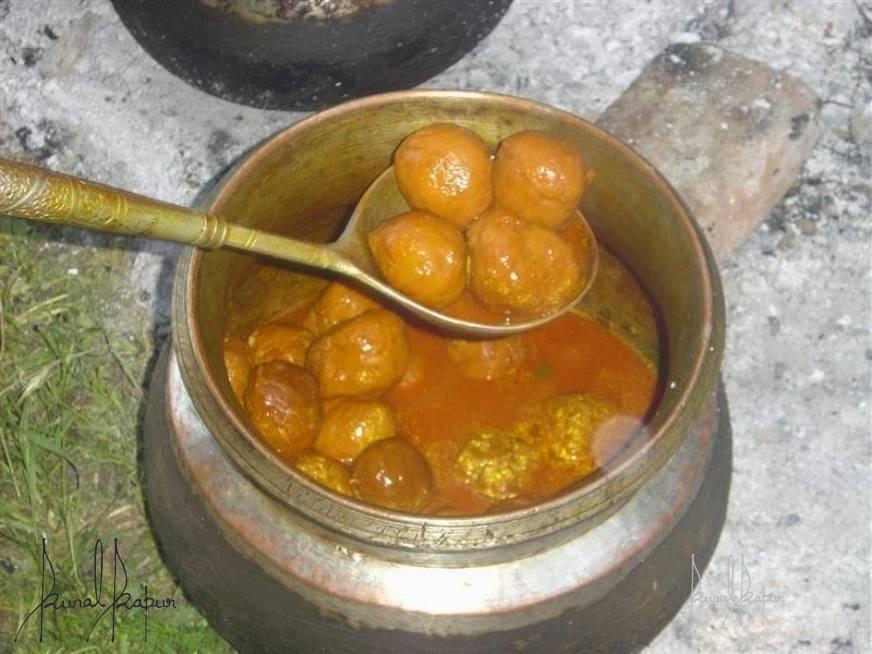 A Wazwan is the most lavish spread of meal that I have come across with the Indian cuisine. As a student of I.H.M (hotel Management College) more than a decade ago, I remember that French cuisine was something that the curriculum always stressed upon. It was at the college that I understood the classical French style of “courses of food”. A practical reasoning about each course, beautifully styled individual servings of food with separate cutlery laid out for separate courses of food offered. Things like table and the height of the chair were equally important to quality food and quality service. With such impeccable service and food offered by the French classical menu, I had a high regard for the cuisine and their creators.

With this experience I entered the hotel industry with my first job. I specialized in Indian cuisine and very soon I had to reckon with the fact that blew away all the fascination I had for the French classical service. It was the Kashmiri Wazwan that made me understand the true meaning of “Food” and the “Joy of Sharing and Eating”. This is where the French style went face down.A Wazwan is an elaborate meal with the Kashmiri cuisine, especially made on festivities or celebrations. A Wazwan has different courses almost all of them has meat with few vegetables like Haaq (local leafy vegetable) and Nather (lotus stem). The classical Wazwan offers up to 36 dishes. Depending upon the pocket of an individual the Wazwan today can be have anywhere from 10 dishes to 40 dishes, served one after the other. The waza (chef) or the vasta waza (chief chef) makes sure that everything is prepared fresh from the scratch. Nothing comes from the fridge and nothing goes to the fridge, its fresh all the way.

To begin with Noon chai or kahwa is served to the guests who arrive for the Wazwan. Noon chai is a salted tea made with green tea, salt, soda bicarbonate and milk. It is a light pinkish tea very popular with the kashmiris. Kahwa is a fragrant green tea which is slowly simmered for few hours and scented with saffron, nuts and spices. The beginning of the Wazwan is marked by making groups of four. Unlike the French style of course, for the Wazwan people are grouped in fours and seated on beautifully hand crafted Kashmiri carpets. These groups of four eat this lavish meal together in the same plate and it is immaterial which religion you are from. This is something that I have never experienced in the rest of India or any other place.Before the first course arrives everyone offers prayers to god and thank him for the meal that is about to come. Hands are washed in Tash-t-Nari which is placed in the center and the server pours warm water from “Samovar” (Kashmiri kettle). A large plate usually about 1 foot in diameter is placed in the center which forms the main plate for all four guests to eat. This is essential plate that binds all the four is called the Trami. Small side plates are however placed for everyone for keeping aside any bones.

The first course begins with a rice preparation which is topped with kebabs which are usually dry with at least one meat preparation which has some moisture to go along with the rice. The kebabs are in multiples of four and varieties can be anywhere from 6 to 10 or 12 or more. The must haves on the first course are Methi Maaz, Shammi kebab, Tabak Maaz, Seekh kebab, Dodh kokur, Wozul Kokur. Another interesting thing is that there is no cutlery at all. The food must be shared and savored with own hands. Joy and satisfaction of a hearty meal has to be experienced by eating with hands and cannot be merely expressed in words.Once served with the kebab course, comes the next course. Take attention cause no plates are changes, the same trami is now used to serve the next course which is “Rista”. A rista is pounded meat ball curry which has a robust lamb flavor and bears a bright red colour. The secret to a perfect rista is to use meat that is freshly slaughtered. Amy other meat is of no use. It is said that once the meat is comes to be pounded into mince balls the waza checks the meat to make sure it is still warm and fresh. Though there is no formal announcement for the commencement of the second course or the curry course, but it always begins with rista and Ends with Goshtaba. A goshtaba is again a pounded meat ball curry but is white in colour and is cooked in yogurt.

In between the rista and goshtaba there is an array of meat and few vegetable curries. The popular ones being rogan josh, marchwangan korma, Daniwal Korma, Haaq, Ruwangan Chaman, dum alu, aab gosht, yakhni. Rice is a staple and is served by the assistants. Few popular types of bread also do the rounds on the table.Very interestingly for the wazwan the size of the goshtaba (which is the last in curry course) is 4 times the size of Rista. For the same reason only a single piece of goshtaba is served which is to be shared by all the four.

Between the second course and the third course prayers are offered again for the fantastic meal. Servers once again bring in the Tast -t -Nari and Samovar to assist in washing the hands. The trami is cleared. The third course is a dessert course and the favouties are the “Firin” (phirni) served cold during summers and Suji Halwa served hot in winters. The desserts are served individually. Post the desserts guests are again offered Kahwa marking an end to a great bliss.As a chef I am in complete awe of the wazwan. I see so clearly that a wazwan is not just about great food but also is a means to togetherness, love, sharing and caring. On the wazwan no one is judged as big or small, all are the same and eat from the same. The Great Wazwan teaches respect for others, their religion and beliefs. There never any beef served in a wazwan simply because the kashmiri Muslims respects the sentiments of the kashmiri pundits. And in return the kashmiri pundits do not insist on Jhatka meat in order to not to disrespect the Muslim beliefs. Where else in India would you find such acceptance and love? Someone truly once said “Agar Kahi Jannat hai, To yahi Hai….”